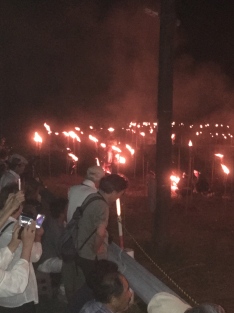 THE MARK OF the HANASE MATSUAGE ( 300 year old fire festival ) followed by the more intimate HIROGAWA MATSUAGE heralds the last few weeks of the hot summer days to be enjoyed in the mountains. As temperatures soar down in the city, we were able to appreciate the cooler 7 degree difference  and putting us  in the mood for the wonderful autumn colours that promise to come.

A little explanation on the fire festival: the torches are fuelled by the flame kept burning from the local shrine, which then ignite the 1000 or so free standing hand crafted torches . Once lit, a synomonous drum beat signifies the torch carriers to gather around the 30metre tree trunk which has been raised onto a platform and at it’s top is surrounded by a large nest of brush, straw and hinoki. The idea is for the torch-men to swing their torch and hurl it upwards and try to get a hole-in-one. Not an easy task. After 6 attempts the first torch landed into the nest and started to ignite. A much frenzied 12 minutes later , egged on by the happy onlookers, it was all over and they dropped the burning tree to the ground and the sacred rites were said and everyone went home! 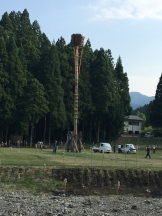 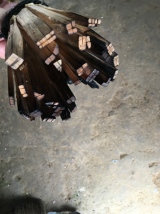 Last week also saw the remnants of Typhoon #15 which blew over the top half of the mainland and on to Hokkaido. The much needed rain filled up the water tanks and with the river swollen decided to press on with the veg garden, Holes need to be dug, land needs to be tilled and beds need to be prepared and seeds need to be sowed!!

Because of the problem with wild deer eating everything in sight, all vegetation must be netted in some form or other. Our plan is to surround the garden with fencing: and to keep it in with the image of the house and walls,the idea is to singe all the fence posts and slats over a fire pit to give it that Edo look? 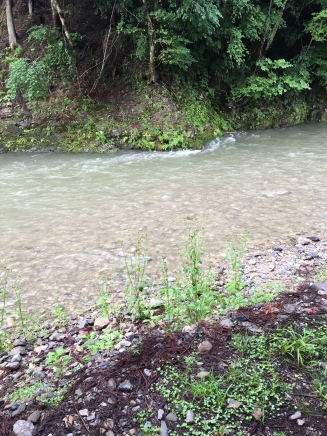 First a path with local river bed rocks has to be layed. then 24 fencepost holes to be dug.

WITH THE WET WEATHER and the workers at bay I went down to Kyoto to pick up the timber we had purchased to use for flooring around our irori hearth. Keiko found a re-cycled timber shop ( http://www.kozai-ichiba.co.jp) which collects and sells  dismantled houses that date back from yesteryear. The timber we chose was taken from an old farmhouse at least 130 years ago.

Very Japanese, two young petite girls attired in flight attendant uniforms and high heels man-handled all the wood on display to find what we were looking for and fed us with copious amounts of cold tea. Well worth a visit if you need recycled wood!

A RATHER DISTURBING discovery we found was the swarm of yellow hornets nesting on the side of our Hanare, adjoining house. There are different ranks of  hornets and “ours” comes in at number 2 on the most deadly scale. But get this, and don’t laugh, but apparently, they recognise the house owners’ faces and don’t touch us!!!!… only the visitors!!

A quick call to the city council and they sent a professional up to fix the problem. With baited rag soaked in honey and poison, the honeytrap was dropped in to the nest. within 3-5 days all will die. We are told to keep the nest because it is in the best location and as long as there is a nest there no other invading  hornets, wasps / killer bees will try to move in. Also apparently these yellow hornets enlisted the help of the lower rank hornets to help build their nest and once the job was done. they would all be “executed”by the bad guys! ( reminds me of the grim tale of the clan Macdonald and Campbells of Glencoe )

2 thoughts on “End of summer”

This is a text widget. The Text Widget allows you to add text or HTML to your sidebar. You can use a text widget to display text, links, images, HTML, or a combination of these. Edit them in the Widget section of the Customizer.
Loading Comments...
%d bloggers like this: